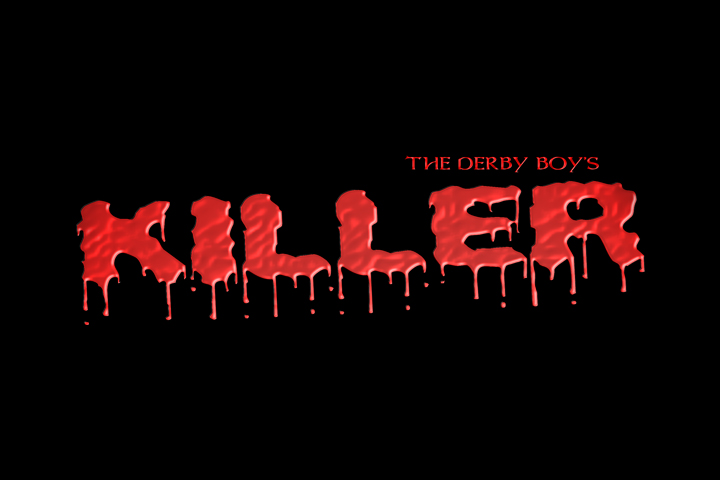 This is a Irish/Halloween/Zombie version of Michael Jackson's "Thriller"
music video with "THE DERBY BOYS" Irish Band. The original video cost over
$800,000 to make in 1983 and in current dollars, that is about $1.7 million
dollars. The final video was just over 14 minutes in length. We have about 5
minutes and basically a zero-budget.

LOGLINE: The "Killer!" music video is a spoof of Michael
Jackson's "Thriller," but with an Irish/Zombie/Halloween theme where
"Seamus," an Irish band member is accompanied by his girlfriend "Alana"
to a movie theater. She gets scared and wants to go outside to
the parking lot. Zombies abound the area and the girlfriend dies
due to his singing that wakes the zombies.

All of our videotaping is "in the can" which means that we have completed
the filming process. We had a very good team that worked well
with one another. Everyone can be proud of how it turned out! 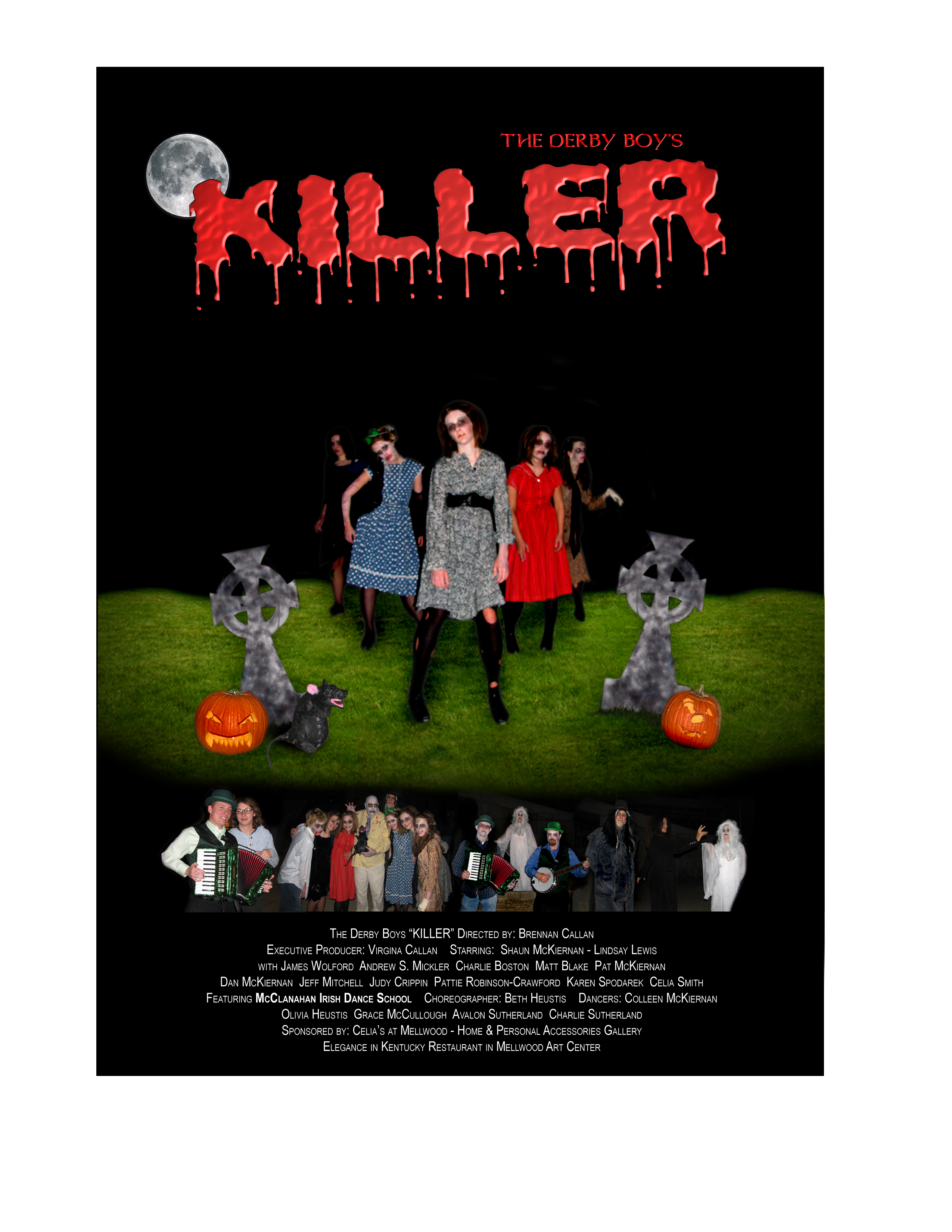 We are aware the poster revisions are needed and our graphics designer
is presently on another film set in New York. Upon his arrival, we will
be updating the poster and then you can download it from that point. It
will be in the form of a .jpg, but also in a Word Document so you just need
to load up white cardstock that is 11' x 17' into your printer to make as many
as you like of it. As ink is expensive, you might want to make up a few and save
that file for later. We had hoped to have these revisions before the premier, but
that just will not happen.

In the near future

1. Prepare timelines for all videotapes from the three cameras as that
will help us to use our final version of the video
to prepare our documentary of the entire video.
2. Correct the poster.
3. Continue to update this webpage and email team mates on our major progress.


VERSION #1 has been shown in the following venues:

It should be noted that there is a gap of the number of versions as improvements
continue to be made on this video to prepare it for a larger audience and to
remove potential errors in it that could not be avoided during the 48 hour
production; but that we now have time to resolve.

VERSION #4 has been shown in the following venues:

VERSION #5 has been shown in the following venues:

On 26 July 2008, new vocals have replaced the original ones and now the singer is Michael Stollaire.

15-17 August 2008, our video has been accepted to the Fright Night Film Fest in Louisville, KY.

FESTIVALS WHERE WE HAVE OR ARE SUBMITTING THE MUSIC VIDEO

SCI-FI-LONDON: The London International Festival of Science Fiction and Fantastic Film
The video was mailed on 10 December 2007 to London, England

Cincinnati Film Fringe Festival
This festival is in Cincinnati, OH. The music video was mailed in February 2008.

Fright Night Film Fest 15-17 August 2008, our video has been accepted to the festival.

The Chicago Lesbian & Gay International Film Festival is the second oldest
gay and lesbian film festival in the world and prides itself on showcasing
the best LGBTQI films and videos from around the globe. From international
feature films to social issue documentaries to experimental shorts, Reeling
has always presented a range of genres that demonstrates the rich diversity
of work being produced. The festival is not only one of the most important
cultural events for Chicago audiences, it also attracts many people from
throughout the Midwest who consider the festival to be the highlight of their
cinematic year.

Reeling 2008 will screen over 100 independent films and videos over 10 days, from
6-15 November 2008. Through the generosity of our travel and hotel sponsors, Reeling
is able to invite several filmmakers each year to attend the festival and discuss
their work with the audience.

Indian thriller 3 This version does
not look exactly like the Michael Jackson version, but it is better than some of the
other linked videos on dancing and lighting.

Indian Thriller Hardcore Dance This is a shorter version of
the same video, but done with different music and cut down to avoid being too long.

Brazilian girl mar - cover Indian Thriller Not as
good as some other videos.

Thriller-with the touch of Irish

Listings above do not constitute an endorsement by the Kentuckiana Cinematography Club (KCC); its founder; or its members; of these persons, businesses, events, or establishments. These links are enumerated for "entertainment purposes" only.

Please Note: The Kentuckiana Cinematography (KCC) web site restricts by policy its hyperlinks to other sites of quality. KCC neither controls or guarantees the accuracy, relevance, timeliness, or completeness of any linked information. Further, the inclusion of hyperlinks to web sites other than KCC web sites is not intended to assign importance to those sites and the information contained therein, nor is it intended to endorse, recommend, or favor any views expressed, or commercial products or services offered on these outside sites, or the organizations sponsoring the sites, by trade name, trademark, manufacture, or otherwise. Once you link to another web site, you are subject to the disclaimers, security, and privacy policies of the new site.

Kentuckiana Cinematography Club (KCC) webpages contains copyrighted material not all of which has been authorized by the copyright owner. We make this material available for the purpose of informing the public about resources on the internet.

This constitutes the "fair use" of any copyrighted material noted in section 107 of the US Copyright Law. In accordance with Title 17 U.S.C. 107, this material is distributed without profit to all who have expressed an interest in it.

Any use of copyrighted material on this site for any purpose that goes beyond "fair use" must have permission of the copyright owner.

If material or information on Kentuckiana Cinematography Club (KCC) webpages is your personal property, and you would like to have it removed, or credit given to you, please contact us.

This site contains copyrighted material the use of which has not always been specifically authorized by the copyright owner. We are making such material available in our efforts to advance understanding of environmental, political, human rights, economic, democracy, scientific, and social justice issues, etc. We believe this constitutes a 'fair use' of any such copyrighted material as provided for in section 107 of the US Copyright Law. In accordance with Title 17 U.S.C. Section 107, the material on this site is distributed without profit to those who have expressed a prior interest in receiving the included information for research and educational purposes.

If you wish to use copyrighted material from this site for purposes of your own that go beyond 'fair use', you must obtain permission from the copyright owner.